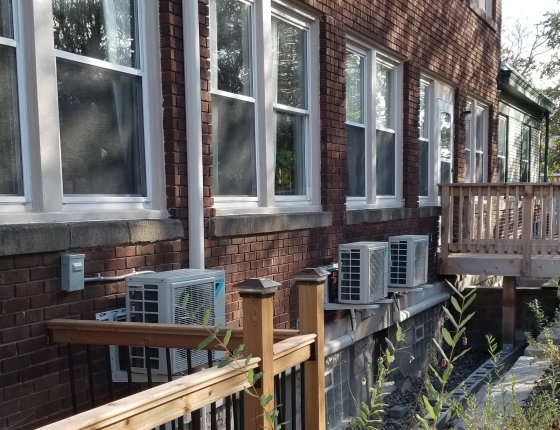 High-efficiency technologies like air source heat pumps (ASHPs) have significant potential to improve space-heating efficiency and reduce energy costs for houses in cold climates. ASHP technology has been available for many years, but until recently, technological limitations caused concern about efficiency and reliability during the coldest months of the year in climate zones 6 and 7. Recent generations of ASHP have improved with the addition of an inverter-driven compressor and updates to the refrigerant, making the systems better suited for cold-climate heating. The inverter-driven compressor allows the compressor speed to modulate and increase capacity during periods of colder outdoor air temperatures. The increase in efficiency and operating capacities of cold-climate air source heat pumps (ccASHPs) provide an opportunity for energy-efficient space heating for homes without access to natural-gas heating, a market that is typically underserved.

Cold-climate air source heat pumps are available as both central-ducted systems and ductless systems. Both system types are available with single and multizone indoor units. While the study described in this article focused on single-zone systems, multizone systems are expected to perform similarly.

Central-ducted systems are designed and installed to meet the full load of the home by distributing heat through forced-air ductwork. Ductless systems deliver heat to a specific area of a home through a single interior head with no ductwork. In cold-climate applications, ccASHPs typically require a backup system to provide heat when cold outdoor air temperatures limit the heat pump capacity of ccASHPs, or prevent them from operating. The integration between the heat pump and the backup system is an important design and installation consideration, one that can drastically affect the performance of the system. Ducted systems typically use a propane furnace as a backup. These backups take over the load of the system at an outdoor air temperature where the capacity of the heat pump is no longer sufficient. This temperature varies with the house load and the size of the system. It is usually about 10°F. Homes with ductless systems typically do not have central ductwork. These homes often rely on electric-resistance baseboards for backup heating. 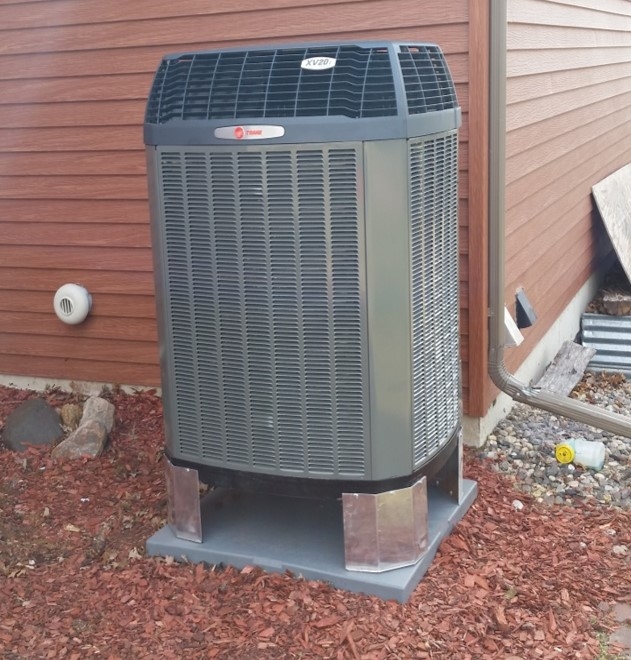 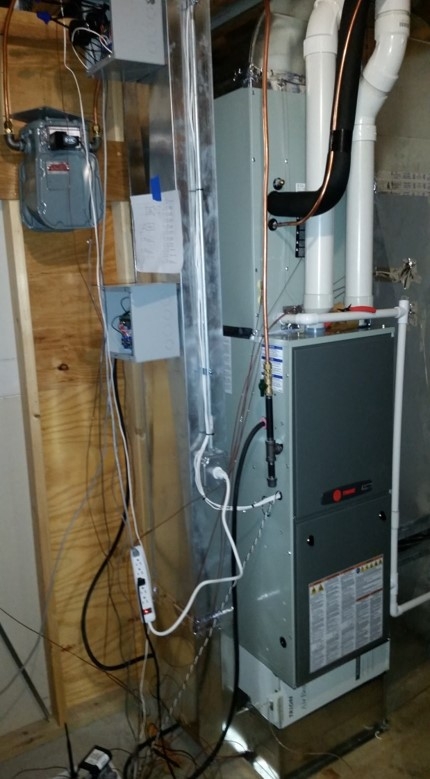 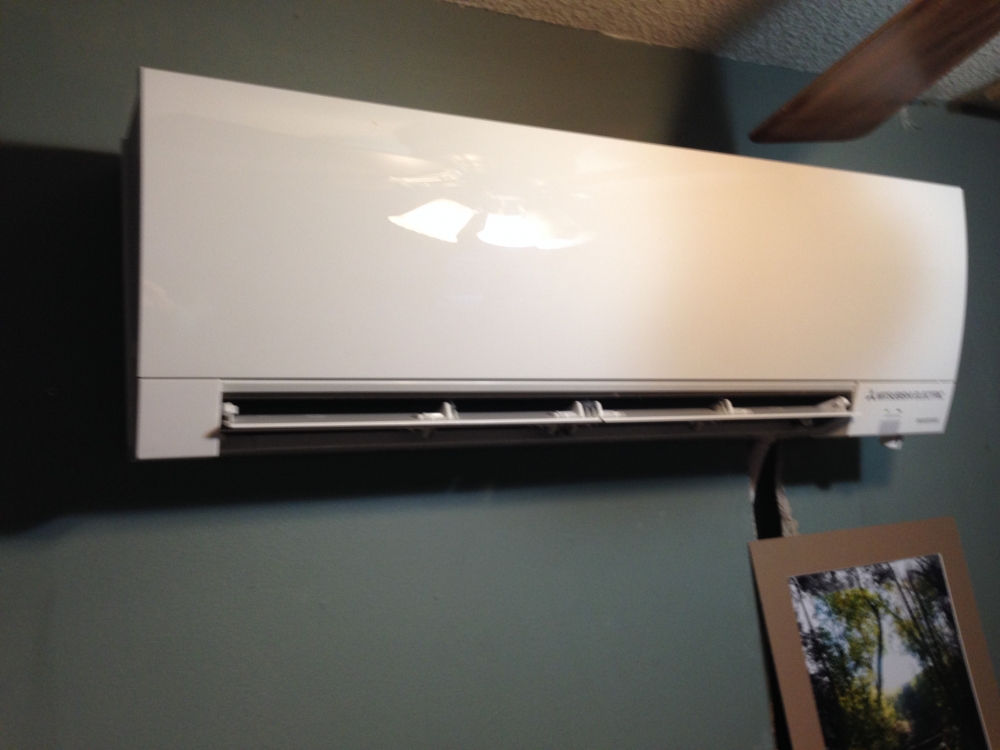 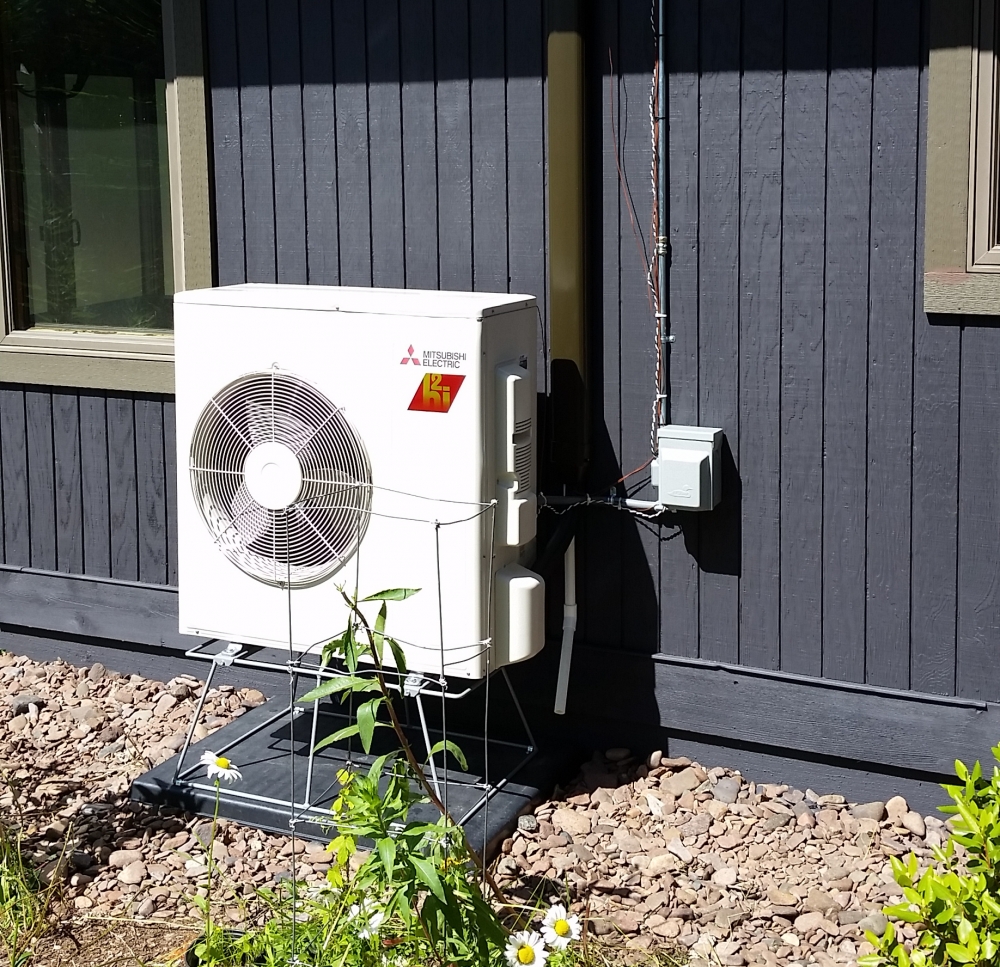 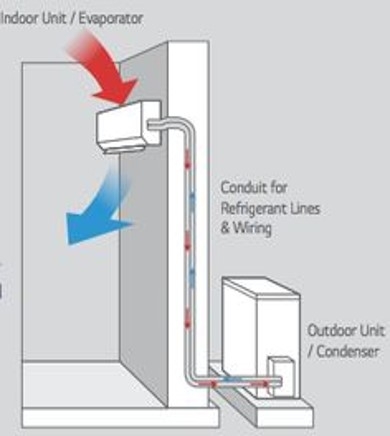 Graphic of how a heat pump works to cool a home.

The Center for Energy and Environment (CEE) conducts field research on emerging technologies that have the potential to reduce energy use in Minnesota. ASHPs have been of particular interest, because they can significantly improve energy efficiency. A field study was necessary to evaluate this new technology and learn how a heating system designed around a ccASHP would perform in actual installations. In 2015, CEE conducted such a field study, with a CARD grant and additional support from Great River Energy and the Electric Power Research Institute.

CEE developed a field test methodology to characterize the ccASHP, and to assess its potential use in conservation improvement programs. The study was conducted beginning in 2015 as follows. First, Minnesota characterization data were used to identify the sites that would best represent the Minnesota market for ccASHPs. Once the sites were identified, equipment was selected from a range of manufacturers and installation types, the purpose being to consider the full range of available technology. Detailed monitoring equipment was then installed with the ccASHP system to characterize the system’s performance in the real world. Finally, data were collected and analyzed to characterize equipment performance, and its performance was compared to the performance of baseline systems. The data analyzed included energy consumption, operating costs, impact of the cold climate on system performance, occupant comfort, and a characterization of system efficiency over the range of Minnesota temperatures.

Cold-climate air source heat pumps operate in three ways. Figure 1 shows the operation of the ducted ccASHP in one of the monitored sites. The plot shows the coefficient of performance (COP) or the ratio of energy delivered to the home to energy consumed in electricity or propane. The three modes of operation are heat pump heating (ashp.htg.on), backup heating (lp.htg.on), and defrost mode.

Heating events where only the heat pump was used typically had the highest COPs, around 1.3 at the lower temperature change point (10°F) and increasing to about 3.5 in the shoulder heating seasons (around 50°F to 60°F). While the outdoor air temperature has the largest impact on the COP, as the figure shows, heating cycles at the same outside air temperature did have a range of COPs. Secondary factors on cycle COP include the rates of operation of components in both the indoor and outdoor units.

The second type of heating operation was the backup furnace mode. These events occurred at outdoor temperatures below the point where the ccASHP was expected to meet the full load of the home (10°F for how these systems were sized).

The final mode of operation was defrost. When the ccASHP is operational and outdoor conditions are below freezing, there is a risk that frost can form on the outdoor coil. To prevent this, ccASHP systems run in defrost mode by reversing the system and transferring a small amount of indoor heat back to the outside. There is a lot of variation in the defrost performance, because defrost can turn on mid-heating cycle. There are also times in an event when only the defrost is running, and almost no heat is provided to the home. This results in a COP near 0, because almost all of the heat goes to the outdoor unit to keep it from frosting. Some events have higher COPs because the heat pump has been on for a long time, and is only active for a small fraction of the event run time. 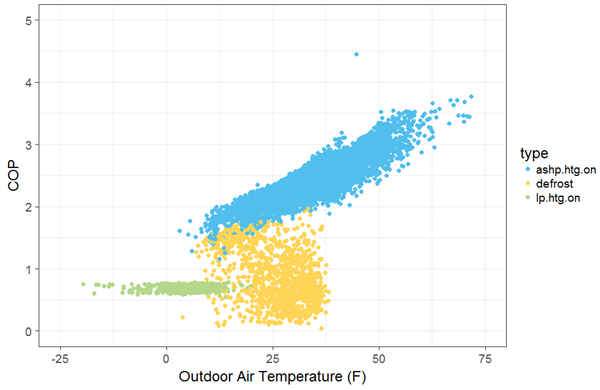 Figure 1. The plot shows the coefficient of performance (COP) for a ducted ccASHP, or the ratio of energy delivered to the home to energy consumed in electricity or propane. The three modes of operation are heat pump heating (ashp.htg.on), backup heating (lp.htg.on), and defrost mode.

The high-resolution data were compiled to determine annual system performance. The findings from this research show opportunities for residents and utilities to reduce total site energy by 35% to 50%. 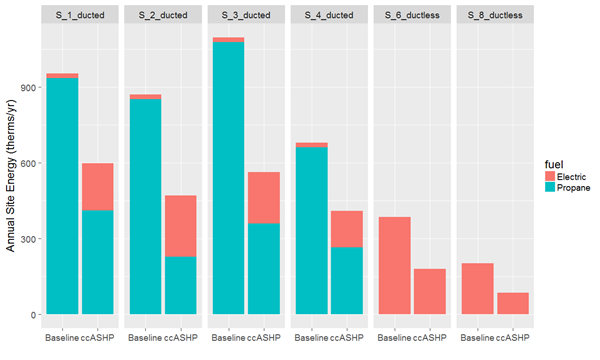 Figure 2. Reductions in site energy consumption realized by switching from a baseline heating system to a ccASHP. 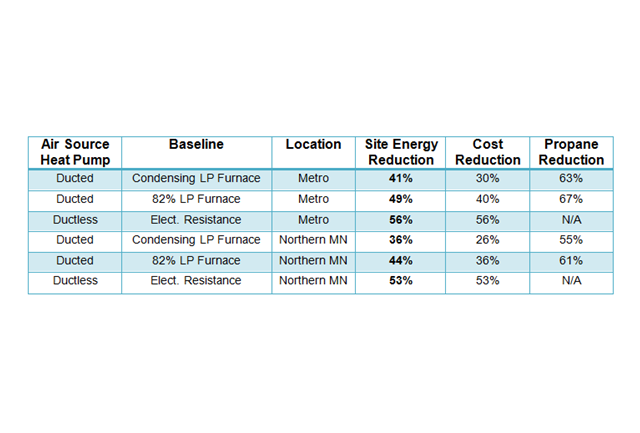 Table 1 summarizes the performance data allowed for estimates of ccASHP savings across a range of baseline heating systems and installation locations.

These savings may be attributed to climate, type of ccASHP, and the system the heat pump replaced, but in all cases, ccASHPs saved homeowners and renters significant amounts of energy and money. Figure 2 shows reductions in site energy consumption realized by switching from a baseline heating system to a ccASHP. Detailed data collection at each site allowed system performance curves to be developed. The performance data allowed for estimates of ccASHP savings across a range of baseline heating systems and installation locations. Table 1 summarizes those results.

Overall, CEE research found that ccASHPs performed to their rated specifications for both system capacity and efficiency (COP or heating seasonal performance factor). With proper sizing, installation, and integration with backup heating systems, ccASHPs are an attractive replacement for homes with propane or electric heating.

Many electric utilities and co-ops in Minnesota have existing ASHP rebate programs that can be modified to include the benefits of heating with ccASHPs. The project recommends that these programs consider installation requirements to ensure that the desired heating performance is met. One method would be to provide a tiered rebate structure. For example, a low rebate could be provided for ccASHP systems installed only for cooling, a middle level rebate for systems designed for cooling and shoulder season heating, and a high rebate for systems designed for cooling and heating through the winter.