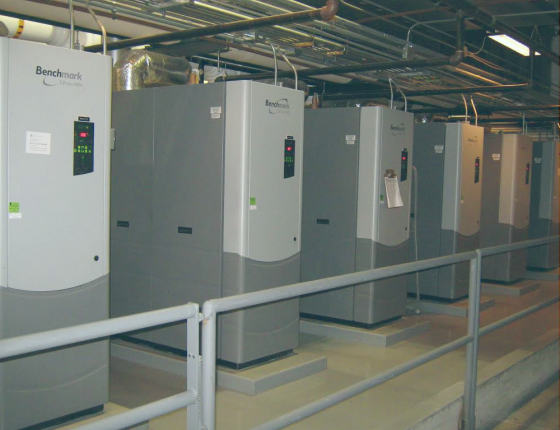 Condensing boilers are one of the most promising natural gas technologies for reducing Minnesota commercial energy use. However, many newly installed systems only achieve a fraction of their expected energy savings.

The efficiency of condensing boilers is extremely sensitive to operating conditions — in particular the temperature of the water entering the boiler. Often, an effective retrofit requires modifications of the boiler system controls and/or piping. Equipment and controls are based on standard boiler operating conditions, which are different than the low temperature and load conditions needed for condensing boilers to perform best.

This field study involved long-term monitoring of key operating conditions at 11 buildings that were chosen to be representative of characteristics common among commercial condensing boiler installations in Minnesota. Investigators analyzed the efficiencies at which the boilers were found to be operating, identified measures to provide energy savings, and calculated potential savings. An industry contacts survey provided more informed guidance for utility program development and refinement.

Optimization opportunities
While the study found a number of measures with the potential to cost-effectively improve boiler efficiency, the maximum achievable efficiency was still found to be below the rated efficiency because the return water temperature of 80°F is too low to provide adequate heat throughout most of the heating season in Minnesota’s climate.

About 80% of the identified savings can be achieved with a simple cost-payback period under five years. The relatively low-cost control and tuning changes could increase average savings by about 3%, and more extensive piping changes could achieve another 2% savings in half of the buildings. Hybrid systems had the largest potential for increased savings through better optimization.

Industry contacts survey results
A survey of local boiler industry professionals provided further evidence of the prevalence of opportunities to improve controls and highlight the perceived value of commissioning and operator training. This is indicative of the general study findings that numerous technical details can impact the achievable efficiency and savings of condensing boilers in Minnesota’s commercial buildings.

Target improvements to hybrid systems. With the largest potential for savings found for hybrid boiler systems, CIP refinement and development efforts should focus on these systems. Additional potential CIP enhancements include:

Additional savings potential. CIP could expand to emphasize areas where greater savings can be achieved such as various control, piping, pumping, and burner tuning optimization.

Cost-effectiveness of changes. The vast majority of identified savings potential could be found by focusing CIP on opportunities with payback of five years or less, most notably burner tuning and boiler system controls.

Market penetration. Any CIP evaluation should consider that a sizable percentage of participants are still likely to have installed condensing boilers in the absence of a program.

In-field efficiency. CIP savings should be based on conservative estimates, as operating efficiencies of commercial condensing boilers are typically well below their rated efficiencies.

Tune-up savings magnitude. The potential tune-up savings identified in this study were far below current boiler tune-up assumed savings; a fresh evaluation of CIP tune-up program savings may be needed.

This project included an initial local market study, a field study of 11 commercial buildings in Minnesota with condensing boilers that covered the full range of heating season conditions, detailed analysis of installed efficiency and potential improvements, and a survey of local boiler industry professionals.

Often the issues contributing to reduced operating efficiency also accelerate wear on the boilers and this can lead to other operational problems.